First meeting CMTC USA, in Edgewater, Maryland.
After a long journey, Lex arrived at the hotel and was picked up by two of our members. They are the grandparents of a girl with CMTC. They were warm and hospitable and provided some very nice snacks.

Lex brought “stroopwafels” for all the members. This is a typical Dutch treat, consisting of two waffles with syrup in between.
Three children with CMTC also attended.

Lex gave a presentation – also available on our website in the members section – from which information and experiences were exchanged.
The problems that were discussed are actually identical to those that we as an organization encounter in the Netherlands and other countries: 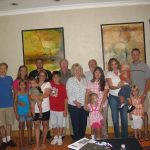