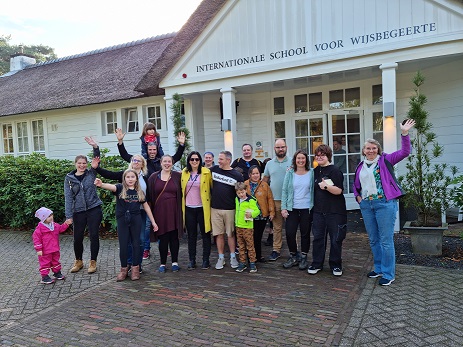 Thanks to funding from the Dutch government, we were able to organise our first Patient Advocate (PA) training in October 2022. Originally, this was planned to take place in the year 2020, but because of covid we had to postpone our project for two years.

On the 26th of October, our PAs from Austria, Canada, England, Germany and Spain arrived. Unfortunately, PAs from countries including Brazil, Kenya and the USA were unable to participate in the training in the Netherlands for various reasons. Getting to know each other was, of course, first on the agenda. On the first evening, we had a meal together and were able to chat to each other some more after this.

The first day of training started on the 27th October. Each PA received the PA handbook and, using a presentation as a guide, our PAs were taken through a great number of topics. The first task was to create an ‘elevator pitch’ and to share this with each other. The day was rounded off with an authentic pancake dinner.

We started the second day with the continuation of the handbook and the creation of action plans that serve as the foundation for each PA to make a start with their activities. The action plans were also shared in the group so that we could learn from each other. The second part of the afternoon was spent getting to know each other better and preparing our members’ conference, which kicked off the same evening with a bite to eat and drink with the conference participants.

We organised a crafting activity for the children of our PAs, so that they also had a great time together.

The idea of being together over a period of several days was well received, certainly in combination with our one-and-a-half day members conference.

We hope to organise another training event in the year 2023, but for both new and experienced PAs. We will request further funding for this.