The genetic cause of vascular malformations: an update

Over the past 25-30 years, knowledge about the cause of vascular malformations has increased enormously. Eleven genes have been found in which mutations occur that are responsible for the development of a malformation. Inhibitors have also been found that have a beneficial effect on the cause of many of these conditions. In his lecture, Miikka Vikkula* will give an overview of the knowledge that has been gained through genetic and clinical research and how far we have come.

Many vascular malformations are rare, but not all. For example, cerebral cavernous malformation (CCM) is not that rare (1/200) but only few people who have it, have clinical symptoms. Treatments are mainly aimed at alleviating the symptoms, such as laser, surgery, sclerotherapy, embolisation, compression. However, these treatments do not eliminate the cause of the disease.

Vascular malformations used to be called angiomas. Since there were so many different types of angiomas, it was difficult to understand about which type of angioma doctors were talking about. In 1982, Mulliken and Young therefore made a classification of the different diseases based on the type of flow (fast/slow flow) and the vessel type (vein/artery/lymphatic vessels). This classification has evolved as knowledge about the various diseases has increased.

Vascular malformations can be hereditary or non-hereditary. The hereditary forms are very rare, but research in families with a hereditary form has helped enormously in identifying the mutations in genes that play a role in the development of these conditions. In 1996, the first gene (TIE2) responsible for vascular malformation (https://pubmed.ncbi.nlm.nih.gov/8980225 ) was discovered. At that time Vikkula was doing research in Boston (Harvard Medical School). He found the gene responsible for a venous malformation in a large Italian family. By now, eleven genes have been found for various disorders. The latest gene (CM-AVM2/EPHB4 gene) was found in 2017.

Vikkula found it peculiar that the lesions only occurred in certain places on the body. “If the mutation is present in all cells in the familial form, why is its effect only present in certain places? To get it localised like that you need two mutations in the same gene, we thought. One in the maternal copy and one in the paternal gene copy. Therefore, a second hit (somatic mutation) is needed.”

That hypothesis turned out to be correct from research on Glomuvenous malformations.

(GVMs) published in 2002. (Brouillard et al, Am J Hum Gen: https://pubmed.ncbi.nlm.nih.gov/11845407/). One of the individuals in a family with GVMs was found to have, in addition to the hereditary mutation, a mutation that must have occurred later in life (somatic mutation). This phenomenon has also been found in other hereditary forms of vascular malformations. But not in all malformations. It is possible that the second mutation has not (yet) been found.

It was also remarkable that not all mutations in the genes led to loss of function: one (in the TIE2 gene) led to gain-of-function. It was later discovered that in 60% of non-hereditary venous malformations, there is a somatic mutation in TIE2 that results in gain of function. Further mutations were discovered over the years: an AKT mutation in Proteus syndrome in 2011, a PIK3CA mutation in CLOVES syndrome in 2013. A GNAQ mutation in capillary malformation and Sturge Weber syndrome, etc. This has completely changed our view of vascular anomalies.

Most vascular malformations are not hereditary. But sometimes the hereditary lesions mimic the non-hereditary ones (e.g. PHTS). So genetic counselling is necessary, because if it is a hereditary form, other family members may also have it and be at risk. The better the genetic analysis, the better the diagnosis of the disease and the follow-up/treatment.

Various malformations can now be indicated by the names of the genes in which mutations have occurred. In vascular anomalies, for example, TIE2 and PIK3CA play a role. A mutation in the PIK3CA gene can be responsible for very different phenotypes of the disease. For example, it can cause macrodactyly and syndactyly 2-3 and CM of the right foot of CLOVES but can also cause CLVM of the left thorax, KT syndrome and mixed LM of the left thorax. Different outcomes can be caused by the same gene. Therefore, it is important to have a correct description (phenotype) of the disease together with a genetic diagnosis. 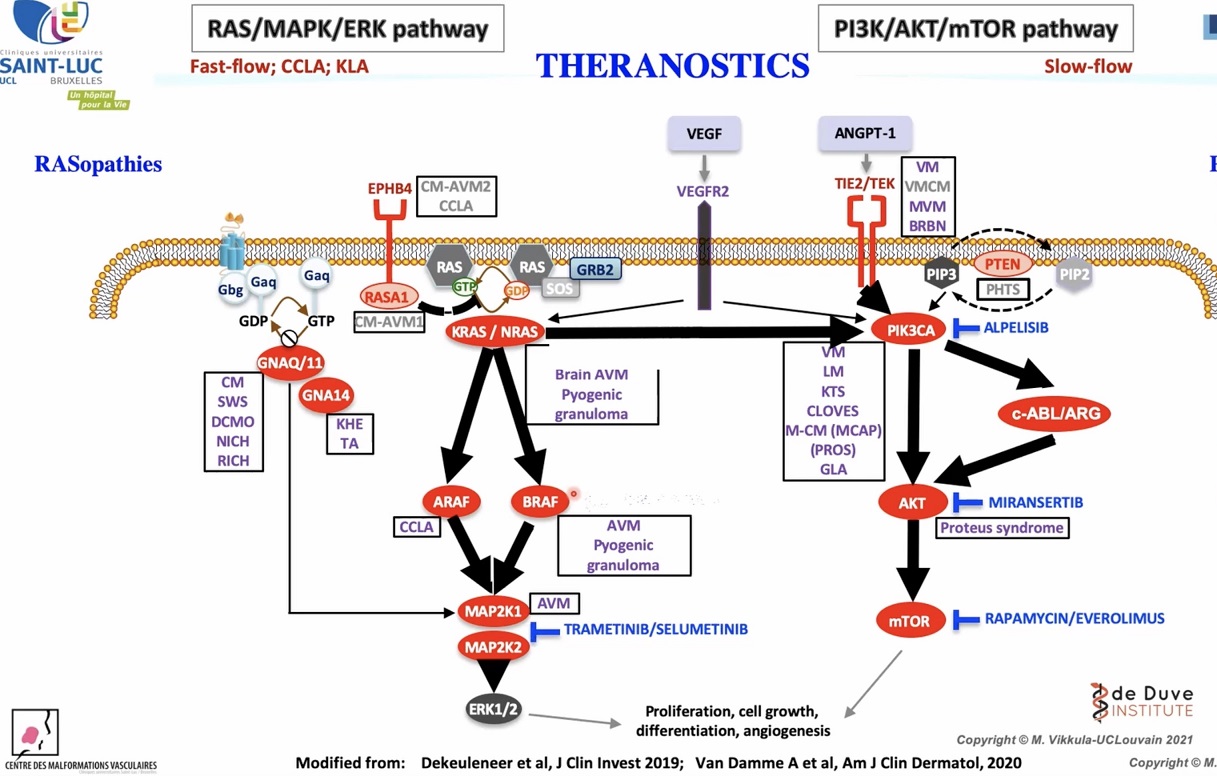 Representation of major pathways that play a role in the regulation of metabolism in mammals. Red (names of genes), purple (names of diseases) and blue (names of inducers).

Mutant cells (tissue from operated patients) can be cultured so that their development can be studied in the laboratory. In comparison with normal (cultured) human endothelial cells, mutant cells grow much more stacked. The normal cells have a cobblestone appearance. Adding rapamycin and alpelisib to the mutant cells had a beneficial effect.

To study the disease in a live model, an animal model was created. For this purpose, researchers injected mutant cells into an immunodeficient mouse (J Clin Invest 2015, Boscolo E. et al (https://www.ncbi.nlm.nih.gov/pmc/articles/PMC4588237/). An immunodeficient mouse has no immune cells and therefore does not react to the injected cells. Over time, the cells integrate into the tissue of the mouse. The tissue of the ‘mutated’ mouse is very similar to the tissue of patients with VM. Blue lesions develop. Four days after the administration of rapamycin, the growth of the lesions stopped completely.

Rapamycin is now being tested in humans. It has already been used in patients for other diseases (cancer), so it is relatively safe to use in patients. In a phase IIA clinical trial, 3 patients with a TIE2 mutation and 3 patients with a PIK3CA mutation with different clinical phenotypes were treated with rapamycin. They had already been treated with surgery and sclerotherapy. All patients benefited from the rapamycin treatment, the biological parameters improved, the functional disorders were less severe. This was proof of concept: we can use molecular therapy (inhibitors) in vascular malformations.

Rapamycin is used in several clinical studies and it is also used off-label by numerous doctors around the world. A small-scale clinical trial of miransertib and two trials of alpelisib are also ongoing. In addition, inhibitors of the MAP2K pathway, trametinib and selumetinib are being tested. These inhibitors have also been used in cancer because these genes are also mutated in cancer.

Preclinical models are therefore important to study the details of lesion development and to screen drugs. Detailed clinical trials are needed to develop safe precision medicines for vascular anomalies.

Vikkula stresses the crucial importance of international cooperation in the field of rare diseases. The VASCERN-VASCA network is very important. Serious and difficult cases are discussed. Guidelines for patients are drawn up and webinars are given. There is also a VASCERN app. It is useful for when you are travelling and when there is an emergency. The app helps you quickly find a good medical centre nearby.