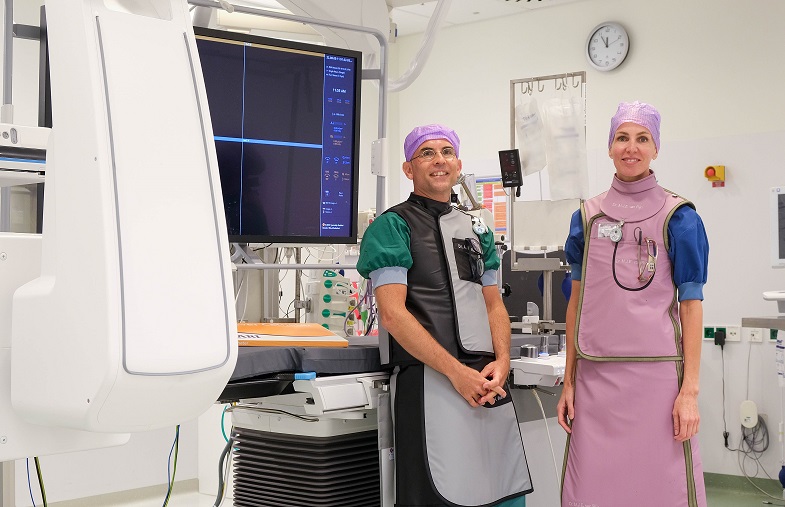 The Erasmus University Medical Centre (Erasmus MC), located in the Netherlands, has a new device that can treat a serious form of acute deep vein thrombosis. So far, it has been used to successfully treat six patients. The Erasmus MC was the first hospital in the Benelux area to use the device.

The device works in much the same way as that which removes a clot in the case of a stroke. With a thrombosis, an interventional radiologist or vascular surgeon slides a catheter into the vein from behind the knee. A mesh collection bag is attached to the catheter, which dislodges the clot and extracts it from the leg. After the clearing of the vein, a stent is often placed into the vein to keep it open.

The device is used in the Erasmus MC for people with a serious deep vein thrombosis, where a substantial clot blocks not only the saphenous vein in the leg but veins in the abdomen, too. Every year, around 25,000 people in the Netherlands develop thrombosis. Only a proportion of these extends to the abdomen.

Treatment with the new device – the ClotTriever – has the major advantage that the patient no longer requires treatment with strong clot-busting medicine. Previously, this form of deep vein thrombosis was treated via thrombolysis, with medicine to dissolve the clot delivered via a catheter. A stent would then also be placed in the affected blood vessel if necessary.

Blood clot-busting medicines are – in these doses – very aggressive. ‘They cause a haemorrhage in around ten percent of the patients with serious thrombosis that we treat with thrombolysis. In two percent, they even cause a life-threatening haemorrhage such as a cerebral haemorrhage (bleed on the brain),’ explains vascular surgeon Marie Josee van Tongerlo-van Rijn.

According to interventional radiologist Adriaan Moelker, the new method saves a lot of time. With the new device, Moelker explains, he needs one-and-a-half to two hours in order to treat the thrombosis. ‘Previously, we would work with a patient for two to three days, because we had to do various checks to see whether the thrombolysis had had an effect. All the while, the patient lay hospitalised with the catheter in their leg and there was the risk of a haemorrhage.’

Now people can leave the bed immediately after treatment and go home the next day, and they have less chance of complications. The new treatment can, therefore, save much distress.

Van Tongerlo-Van Rijn adds: ‘At least one in twelve people develops a deep vein thrombosis at some point. On top of that, Covid-19 causes thrombosis in a proportion of very ill patients. I don’t yet have the figures, but I expect that the number of deep vein thromboses will increase in the coming year.’

With an extensive thrombosis that extends into the abdomen, the leg can lose circulation if the clot is not removed immediately. With less serious cases, the post-thrombotic syndrome can develop over time. ‘The leg then remains continuously swollen and painful. Standing and walking for long periods is difficult, and patients develop skin problems and sometimes even leg ulcers.’

With deep vein thrombosis, a vein carrying oxygen-poor blood away from the leg becomes blocked by a clot. The blockage can be several centimetres long and can even extend to the abdomen.

May-Thurner Syndrome is one of the conditions that can be caused by such a serious deep vein thrombosis. The syndrome is a rare condition that particularly occurs in women between 30 and 50 years old. The syndrome is also known as iliac vein compression or Cockett’s syndrome. With May-Thurner Syndrome, the left iliac vein is compressed by the right iliac artery, meaning blood can no longer flow away from the leg. This happens to a small extent in many people, but in a small number, an extensive deep vein thrombosis develops in the abdomen.

The resultant thrombosis is, just like other thromboses, red, swollen, and painful, but affects the whole leg, not just the lower leg. An ultrasound or CT-scan should indicate how extensive the thrombosis is. If it has extended as far as the abdomen, then the new treatment can be considered. The success rate is higher with recently formed clots, so treatment should preferably start as soon as possible, but within two to three weeks at the latest.