This year’s U. S. meeting was held on July 16th at the Tysons Corner Marriott hotel outside Washington, D.C.
Doctor Maurice van Steensel was on hand, primarily to perform diagnoses, but also to answer questions.

Similarly last year, Steve Groft was in attendance. Dr. Groft is currently serving as director of the Office of Rare Diseases (ORD) at the National Institute of Health (NIH).

Dr. Millan Patel, who is leading genetic research in the field, came specially from Canada.  We would like to express our extreme gratitude for his effort and contributions.

Doctor Patel explained what his research entails, and was also able to meet personally with Dr. van Steensel who – in addition to being a dermatologist – is also a geneticist.

Dr. van Steensel arrived Friday evening and started early Saturday morning with 14 diagnoses.  Then on Sunday, he flew back to the Netherlands.  I would like to thank him for his enormous effort.

There were some participants who received diagnoses not involving CMTC.  Fortunately, however, our organization covers areas outside of CMTC (as long as they involve vascular malformities), so those people “came to the right address”.  For more information regarding the subclassification of vascular malformities, I would refer the reader to the presentation of Dr. Charlene Oduber given at our 2010 meeting in the Netherlands.  In this presentation, the various subclassifications are discussed and further illustrated with photographs.

This was also the first time that events were organized specifically for children, just as we have done previously in the Netherlands.  The children felt included in the events, and the results were extraordinary – even children as young as two years old participated. 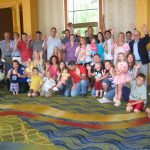 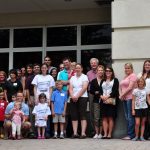