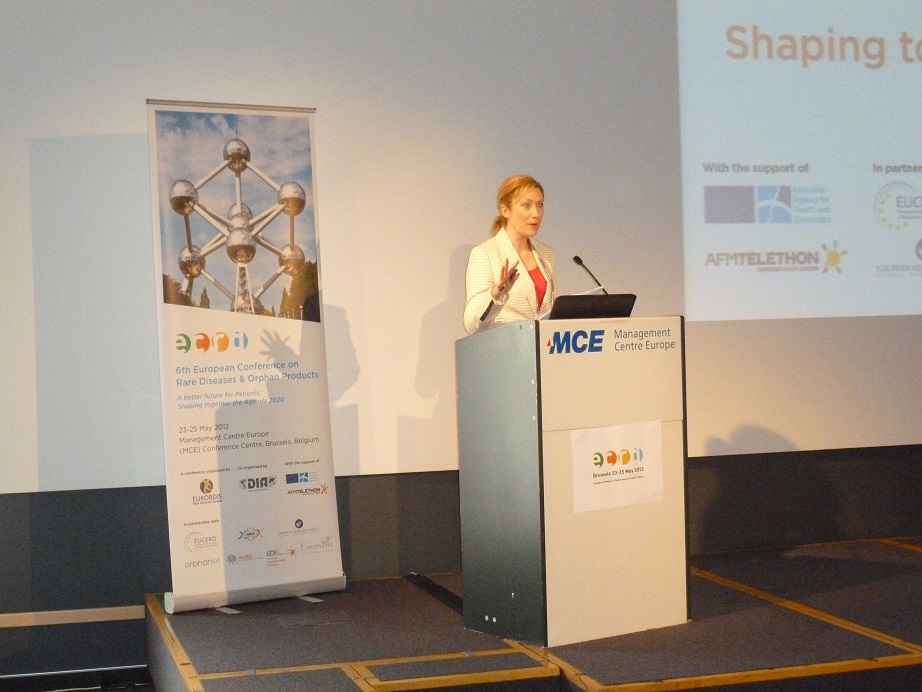 From Wednesday, May 23 to Friday, May 25, 2012, we attended the annual Eurordis conference.

The first day, Wednesday, May 23 began at 9.00 in the morning with the annual Eurordis members’ meeting. The annual report was presented and there was discussion about the plans for 2012 and the coming years. Eurordis works closely with the European Commission of experts on rare diseases. The Commission makes recommendations to the EU Member States for policy in the field of rare diseases. Consider for example the recommendation to the individual EU states regarding national plans for rare diseases. In 2009, the (then) Dutch Minister Abraham Klink signed the recommendation. Before the end of 2013, this plan must be ready.

The Eurordis website contains much more information about what they are working on. One project that was started last year is RareConnect. This includes a website where all the various patient organizations that are committed to a rare disorder can register.

After the meeting the first workshops started. The half-hour workshop that we attended concerned fundraising for patient organizations involved with rare diseases. The workshop was given by Avril Daly (Chairman of Fighting Blindness Ireland/Eurordis), Nick Sireau (president of AKU) and Vlasta Zmazek (president Debra Croatia). The three speakers offered some important tips:

After lunch we attended the workshop “online communities” given by Robert Pleticha (Eurordis/rareconnect) and Dennis Costello (Eurordis). They also have the “RareConnect” project under their wing. The workshop was about Social Media Tools and how patient organizations can use them.

During the workshop, there were two interesting presentations given by the patient groups Dysnet and MyOpathies. Dysnet is very active on twitter and gave a number of tips. You can manage your twitter account with crowdbooster/bugger. With Google+ tweets, etc. are searchable via Google. The chairman of MyOpathies suggested that care be taken with regard to younger members who register. Some threads may not be suitable for those under 18 years of age. Consequently, some parts of the forum are restricted, requiring parental/guardian consent before 13-18 year olds can register.

The third presentation was given by a representative of the organization Beeforbattens. It presented the 5C’s for the use of social media.

The morning of Thursday, May 24 began with a general opening of the conference. Today not only were members of Eurordis present, but also patients (organizations) and other interested parties from around the world. The first workshop started At 11.00. This was attended by our chairman and secretary (Lex and Fiona) and discussed making rare diseases visible to society. Avril Daly (Fighting Blindness Ireland / Eurordis), M. Karkatcharian (Telethon France) and Dennis Costello (Eurordis) gave presentations. Avril Daly spoke about the “rare disease day” in Ireland and in Europe in general. The theme was solidarity, the slogan “rare but strong together.” In 2008, 18 countries participating in the rare disease day. In 2012 there were 63 participants, of which 33 were European countries. It has thus truly become a European issue. This was mentioned during the presentations of M. Karkatcharian and Dennis Costello. They also presented some useful tips for the next rare disease days, especially for the Dutch umbrella organization for rare diseases “VSOP”.

On Thursday evening, a cocktail was organized at the Belgian Comic Strip Center in Brussels, a very nice location just outside the center of Brussels. Angie and Fiona attended – this was a great opportunity to network again.

Friday, May 25 we attended the session ‘healthcare pathways focusing on transition from childhood to adulthood’ . There were three speakers, the first being Hans Loch Miller of Duchenne Muscular Dystrophy (www.treat-nmd.eu). The second speaker was Liesbeth Siderius representing’Stichting Shwachman Syndrome Support Holland’. Her presentation showed that initially, it is still difficult to get proper diagnosis and subsequently, inadequate health and social care is received. It points out the “Chronic Care Model” for rare diseases. The third speaker was the Finnish member of the National Institute for Health and Welfare, Helena Kääriäinen. She spoke about genetic counselling for family planning. 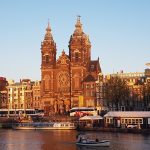 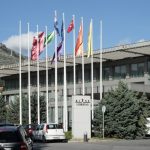