The story of Sanne (Belgium) 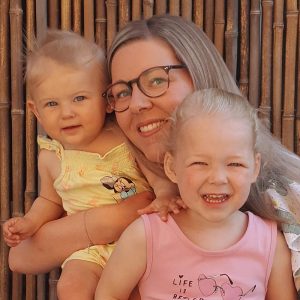 My name is Sanne and on 1st July 2017, I became the proud mother of my eldest daughter.

Soon after the birth, I noticed purple marks on her, but at the hospital, no-one said anything so we were not immediately concerned. I had also seen a bald spot and a lump above her ear, which I found strange. A few hours after the birth, a midwife spoke to me about the marks; she thought they could be port-wine stains or stork bites. She assured me that we should wait for the paediatrician’s visit the following day. During this time, a lot went through my mind but I calmed down in anticipation of the visit by the paediatrician. When the paediatrician’s long-awaited visit finally took place, she just said that they were port-wine stains and should be followed up. She also said to take photos because they could change. And then she disappeared, so we didn’t even have the chance to ask anything else … Then another midwife came and I expressed my concerns and said that I hadn’t had the chance to ask anything about the bald spot and the lump. The midwife asked the paediatrician to come back. My daughter was breast-feeding at the time and the doctor took a quick look at her and said, “that’s a fibroid, some are stalked, others are not”. And she left again. As I had given birth on Saturday, I only had the chance to call a dermatologist on Monday, which I did on my own initiative. The dermatologist came immediately after her shift and also told us they were was port-wine stains, but she did say that she had never seen anything of that size (half of her left foot, back left leg and buttocks, all the way to her back). She answered our questions to the extent possible and provided a referral.

One month later we were in University Hospital Leuven, for our first visit to the paediatric haematologist.

She also spoke of “ordinary” port-wine stains but we had since seen veins appearing transparently on her upper leg; unfortunately, these were not visible at the time of the consultation. The doctor suggested coming back when our daughter was 3 months old, as it could be varicose veins.

Because I had received little or no answers in Leuven, I started to look for possible diagnoses myself and I quickly came to the Van Klippel Trenaunay Syndrome (SKT). Panic struck and I made an appointment with my general practitioner. In fits and starts, I tried to explain my concerns but this was quickly dismissed. I got a referral to the paediatrician, but she did not suspect SKT either.

When our daughter was 3 months old, we went back to the paediatric haematologist with photos to show the “veins”. We then received the diagnosis “Cutis Marmorata”, with little explanation of what this meant.

I started researching again and came across this patient association. We were invited to attend the conference day and we attended with our 4-month-old baby, to get to know fellow sufferers and to be understood (that was great!) We also signed up for the medical consultation. They also thought it could be Cutis Marmorata, but they advised us to go to dermatology instead of haematology for further follow-up.

So a while later we were again at Dermatology at the University Hospital Leuven, I asked about having a scan done of my daughter’s leg and performing a Doppler echo, but they said this was not necessary. The doctor did however immediately say that she could not make any connection between the port-wine stains and the bald spot and lump near her ear. So that’s how we were referred back to the Genodermatosis department. A few months later, we were sitting in the waiting room, waiting to be seen. At least six doctors were there standing around her; they went into consultation behind the scenes and decided that they wanted to take a biopsy.

In conclusion, lasering was not an option. I insisted on trying other settings but the assistant doctor in question did not know if it was possible; we would have to ask the doctor the next time we saw him. The doctor quickly dismissed this and said that we would just have to wait until she was older and for new equipment. There was also a doctor who measured the length of our daughter’s legs and said there was a difference of 2cm. Nothing was done about this. Soon after that, our daughter started to walk, and I was worried there would be problems because of the difference in the length of her legs. I spoke to the (meanwhile new) family doctor to see if it was possible to have a referral to orthopaedics.

A while later we were in Pellenberg for our first appointment at the Orthopaedic Department.

In the meantime, our little girl was 1 year old and they took the biopsy. We were never told which mutations she was being tested for. Five months later, a follow-up appointment was scheduled for the result. That appointment was rescheduled because the results had not yet arrived. A while later, the new appointment could not take place either. I then asked if there were any results, but unfortunately, nothing was known, so I again asked if they could let me know something.

Eventually, I received a phone call from the secretariat about 7 months after the biopsy had been taken, relating to the date of our consultation and I again asked for the results. The man checked on the computer and said that the results were available. He said it was Klippel Trenaunay Syndrome (KTS), but this had to be discussed during the consultation, not on the phone. At that moment, the earth had moved from under me. All those months I had thought she had KTS but it laughed away and in Leuven they had never even mentioned it and when I asked them, they changed the subject. Now it was suddenly confirmed, so definite, a shock, sadness, why my child? About 8 months later we had our long-awaited appointment at Genodermatosis to discuss the results of the testing. There was no mention of KTS, it was just said that lasering did not make any sense at all. And now she had to be followed up in Orthopaedics. And in the future, she would probably have to wear a therapeutic support stocking. If I hadn’t spoken to the man from the secretariat, we would never have known it was KTS. We visited our local dermatologist afterwards to discuss the results.

While waiting for the results of the biopsy, we decided to look for other doctors that would listen to us. That’s how we ended up at UCL Saint-Luc in Brussels, where they had a very different way of working; it was a pity about the language barrier, but they made every effort to speak to us in the best possible way! Soon it was decided that a Doppler echo had to be done and lasering would certainly be an option; a test session was done immediately with favourable results. Unfortunately, due to unexpected circumstances, the first and second appointment for the laser treatment could not take place. But she has just had her first laser treatment; we have to wait 6-8 weeks to really see the result but we can already see that it is lighter. It has given us hope and courage to continue. The next appointments are already planned. We have a happy toddler, who does everything just like her classmates. We’re now celebrating her third birthday, recently she has started to notice her spots and she is beginning to understand it all. We simply explain it to her and she thinks it’s all very normal so far. Just as if she already understands that it’s a part of her, that it belongs to her. I have often worried about how she will feel when she is older, or that she might be bullied. That worry remains, but I can let it go for now.

I’ve written my story, to show fellow sufferers that they’re not the only ones. I myself found comfort and recognition in such stories.

For reasons of privacy, I don’t want to share pictures of my daughter’s condition, this is something she has to decide for herself when she is older.

Become a donor
Become a member 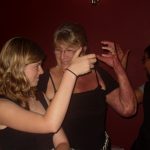