The first Global Congress on Rare Skin Diseases (WCRSD) was held in Paris from 7 to 9 June 2022.

The main aim was to bring together medical teams, scientists, patient representatives, policymakers and industrial teams. The goal was to encourage collaboration between specialists from different areas and countries and to encourage more research and clinical trials to improve patient care and quality of life. Also, they want to include the opinions of the younger generation in the treatment of rare skin conditions.

The conference was held in a beautiful building of the international university. 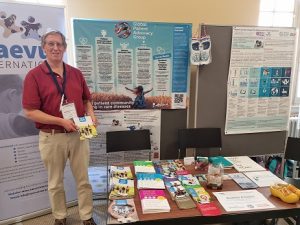 Our stand was colorful and we were available frequently. Of course, we also offered our visitors some small stroopwafels (Dutch caramel waffle cookies). This turns out to be an attention grabber every time.

Our newly published “Parents Support Guide” brochures were almost all gone within one day.

Rare disease facts at a glance:

Burden on the family and their daily life

In addition to the medical problems, the burden on the family and daily life should not be underestimated. Think about the emotional impact (not only on the patient but on the entire family).

Here are a few of the challenges that patients and their families face: 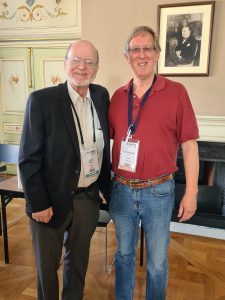 During this congress we also got to meet the very famous Rudolf Happle. He also shared a new article with us right away.

Cutis marmorata telangiectatica congenita (CMTC) is characterized by coarse-meshed capillary malformations arranged in asymmetrically distributed patches. The disorder may be associated with hyper- or hypoplastic limbs, syndactyly, cleft palate, and glaucoma. Because the disease usually occurs sporadically, the concept of a lethal mutation surviving by mosaicism was proposed about 30 years ago. Here we describe three children with CMTC due to a postzygotic GNA11 mutation c547C > T (p.Arg183Cys), documented in saliva (patient 1) or lesional cutaneous tissue (patients 2 and 3). All three individuals had widespread and asymmetric CMTC which was present from birth and became fainter during the first years of life. Variably associated anomalies included glaucoma, choroidal capillary malformation, and body asymmetry. In previous case reports, postzygotic GNA11 mutations were documented in two cases of phacomatosis cesiomarmorata, being characterized by CMTC coexisting with segmental dermal melanocytosis. Moreover, postzygotic GNA11 mutations were noted in two CMTC patients described under the incorrect diagnosis of “nevus vascularis mixtus”. Hence, the present cases convincingly support the concept that CMTC can be caused by mosaic GNA11 mutations and thus belongs to the GNA11-Related Capillary Nevus (GNARCAN) spectrum. In two other bona fide cases of CMTC, however, we were unable to find a mutation in GNA11, which may be explained either by our inability to detect a very low percentage of mutant cells or by genetic heterogeneity of the phenotype.

Jennifer is the CEO of the  Global Skin organisation which is based in Canada (we are also member of this organisation). 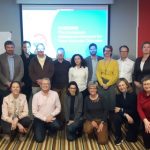