The structure of the skin 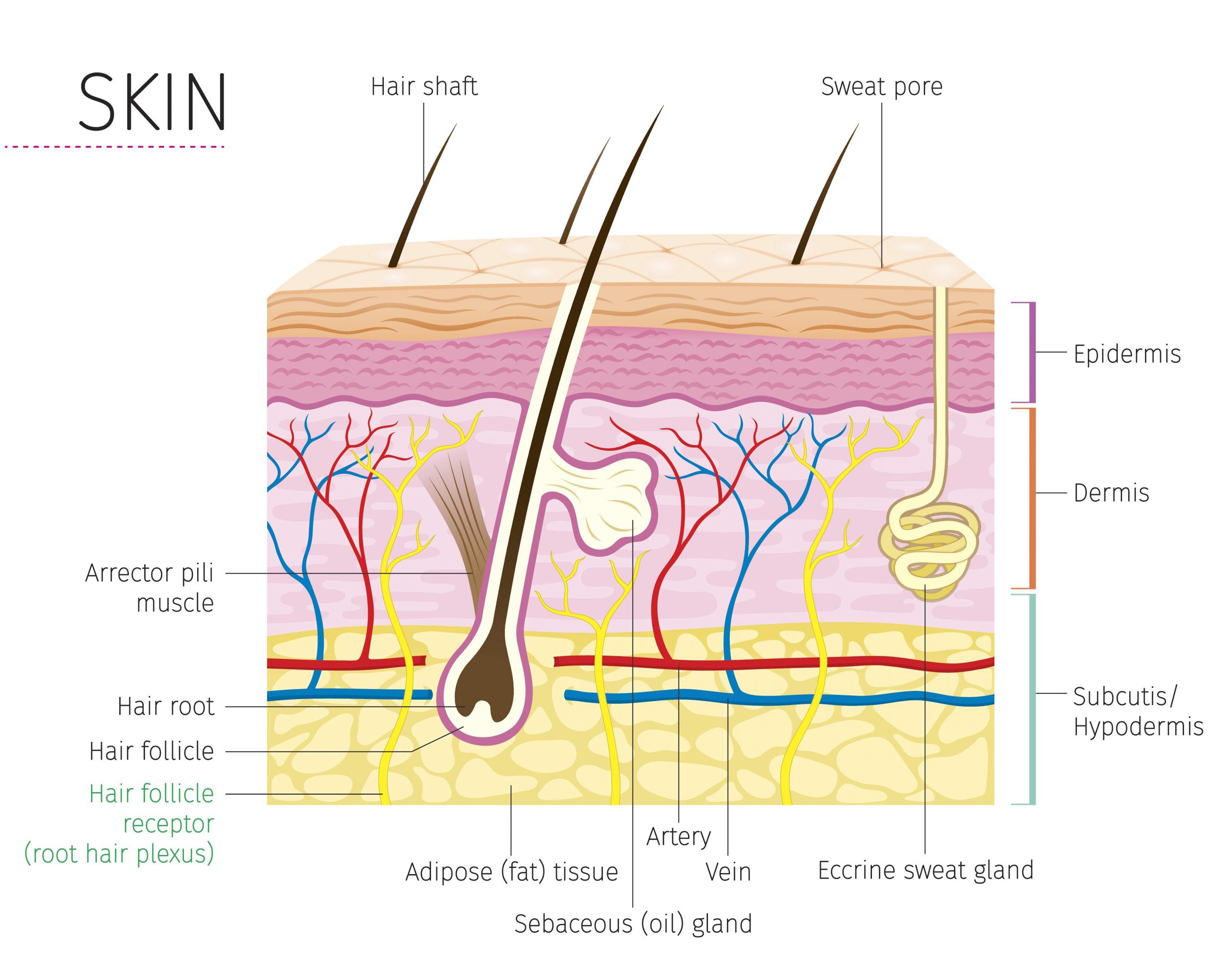 The skin is the cover that shields us from the outside world and protects us again all kinds of outside influences.

The human skin is built in several layers written below:

In below text the following items are discussed:

The epidermis consists for the largest part of one type of cell: the keratinocyt. These cells are formed in the basal layer and slowly move up. Gradually the cells change into a dead horned cellular layer in which the cells lay against each other looser and looser. The connection between the separate epidermic cells is of utmost importance for the protection of the skin again dehydration. Normally spoken this skin is only several tenths of millimetres thick and the horned skin is nothing more than a thin film. In places where the skin contains a lot of callosity (like the palms of your hand and the sole of your foot) the horned skin is extra thick. Because cells continuously divide themselves and peel off at the top, the epidermis renews itself about once a month. The peeling at the surface is usually not visible, except for the haired head at dandruff and certain skin affections like psoriasis.

The epidermis as a whole forms a natural barrier against chemical substances and physical influences like acids, dehydration and damages by sunlight. The skin also protects us against the penetration of bacteria, moulds and viruses.

The corium of dermis is a 1 to 3 millimetre subcutis layer, which consists mainly of subcutis cells, subcutis fibres and a gel like basic substance.

The lower subcutis contains mainly of grease. It has an important function as warmth isolating layer, energy storage and buffer.

The tallow glands are spread all over the entire skin with the exception of the palms of your hand and the soles of your feet. They are always present beside and discharge into a hair tidy. Tallow consists of a mixture of greasy substances that keep the skin elastic and contain it against dehydration. On average there are a small hundred tallow glands per square centimetre. Midway the chest and back, in the face and on the haired part of the head this number increases to about one thousand per square centimetre. People with high tallow production often have greasy hair.

Sweat glands also are present all over the body and there are several types. The so-called eccrine sweat glands are all over the body and play an important role in controlling the body temperature. In times of emotion and nervousness, the glands in the face and palm of your hands produce a lot of sweat. The sweat glands in the armpits, the so-called apocrine sweat glands, have a different structure and function. In the animal world, these glands play an important role in recognizing and beaconing the territory. With humans, this scent could work sexually stimulating.

We thank the Dutch Organisation of Dermatology and Venereology.