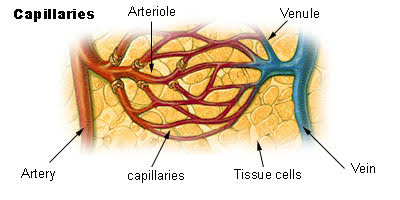 An arteriovenous malformation (AVM) is a vascular abnormality in which there is an abnormal direct connection between arteries and veins. The network of capillaries is missing. Certain mutations in the DNA could play a role in the development of AVMs, but it is usually not hereditary.

In a normal vascular system, an artery supplies oxygen-rich blood under high pressure (due to the pumping action of the heart), which flows through a fine network of capillaries (capillaries) along tissue. This is where the oxygen is released and the oxygen-depleted blood comes together via small vessels in the large draining veins. In that vein system there is a low pressure. In an AVM the network of capillaries is missing. In an AVM the blood from the artery goes directly to the vein. Because veins in contrast to arteries have a thin wall they are gradually inflated by blood pressure into dilated wound ‘varicose veins’.

This can happen anywhere in the body. This can cause problems, but not necessarily. AV malformations, however, can grow and therefore give a greater chance of possible problems.

This is a technique used to visualize arterial and venous vessels throughout the body. Using contrast injected into the blood vessels, images are created to look for AVMs.

CT scans use X-rays to create images of the head, brain or spinal cord and can help show bleeding.

An MRI uses powerful magnets and radio waves to show detailed images of the tissues. An MRI can pick up on small changes in these tissues.

For each person it will have to be determined whether treatment is really necessary and if so, in what way. The treatments also give a chance of bleeding. An AV malformation can be treated in different ways.

With the help of an operation an AVM can be removed. This is only possible when the AVM is located in an area where the surgeon can remove the AVM with little risk of significant damage to the (brain) tissue.

Endovascular embolization is a type of surgery in which the surgeon brings a catheter through the arteries to the AVM. A substance is then injected to close off parts of the AVM to reduce blood flow. The purpose of this is to reduce bleeding and reduce the size of the malformation. (Read more at: https://www.cmtc.nl/en/pedia/ovm/treatment-of-vascular-malformations-with-interventional-radiology/).

Sometimes stereotactic radiosurgery is used to treat AVMs. This uses intense, highly focused radiation to damage the blood vessels and stop blood flow to the AVM.

No material available yet.