Dr. Millan Patel is one of our medical advisors 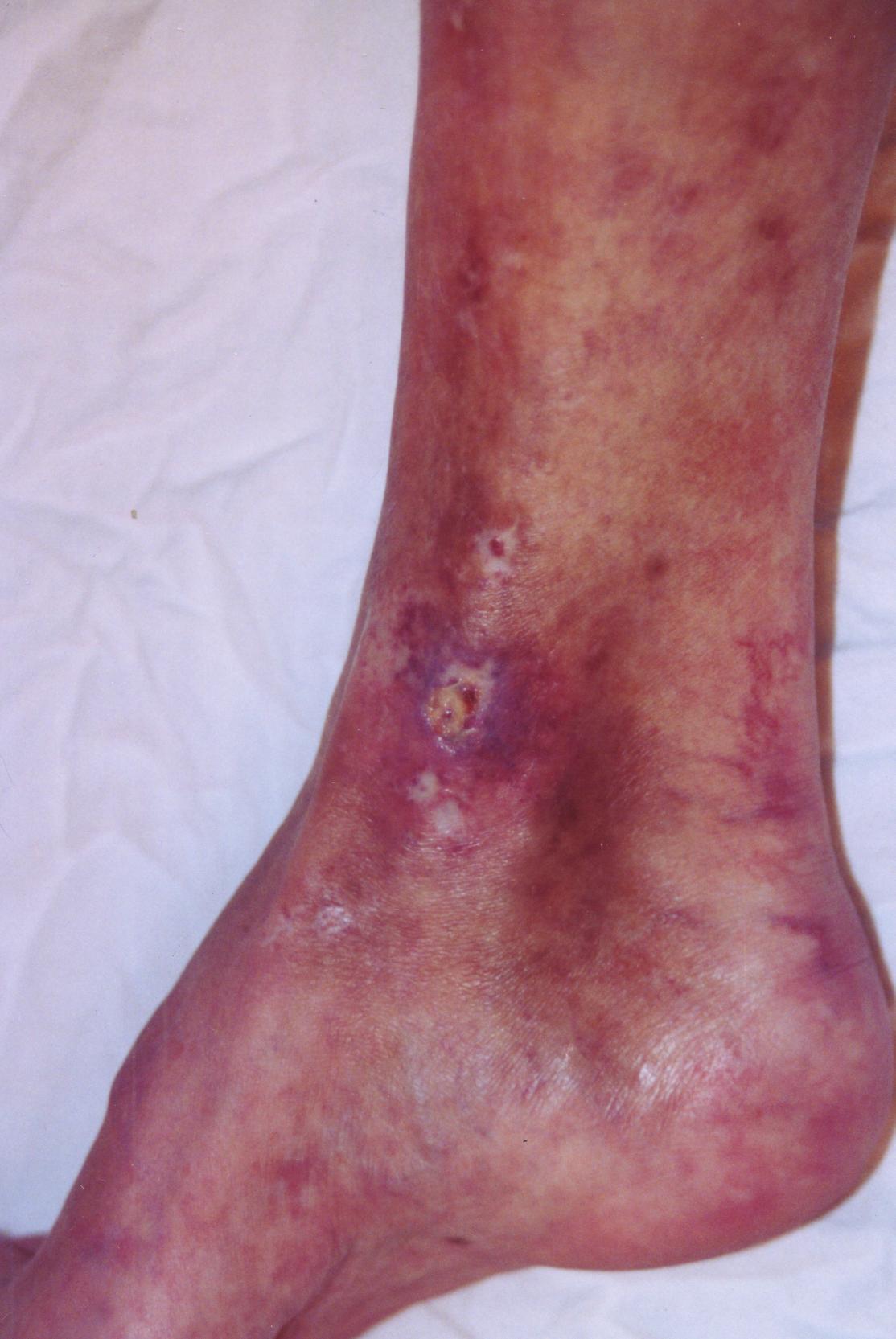 In his lecture Patel gives an extensive overview of the latest knowledge of CMTC. He talks about diagnosis, treatment, screening for abnormalities and improving self-esteem of patients. Furthermore he explains the possible genetic cause of CMTC and the genetic research.

The T in CMTC stands for Telangiectasia and the M for Marmorata (marbled).
Your veins and arteries have capillary beds in between and that’s were gas exchange takes place and nutrients are leaked out into the tissue. In Telangiectasia there is a direct connection between an artery and a vein. If it’s 0.5 millimeter or less in diameter it’s called a Telangiectasia. If it’s more than 0.5 millimeter than it’s called an arteriovenous malformation. Basically they are the same thing, but just different size.

Telangiectasia is only found in 20% of the CMTC-patients. So it’s a minor feature in CMTC. In CMTC-babies there is a redness in a marbled pattern in the skin in response to emotions and cold/warmth but unlike normal babies it doesn’t go away. You don’t see the dilated veins that you see in Klippel-Trenaunay and Adams Oliver syndrome and some of the other associated syndromes. It doesn’t go away completely with warming. Half of the kids have lesions that fade away or partially by two years of age.
This is just a guideline.

“When we examine children we first rule out the following syndromes: Adams Oliver (AO) Syndrome1, MCAP/MCM2, Sturge-Weber Syndrome3, Klippel Trenaunay4, neonatal lupus and a new dermatalogical finding in which many moles, huge number of mongolian spots, huge brown spots are present. If they don’t have one of these it’s probably CMTC”, says Patel.

Patel makes a distinction between classic CMTC and CMTC-Plus. “Classic CMTC is when someone has an affected limb (with marbled skin) which is smaller than the non-affected limb. If you have this classic type CMTC plus some other disorders going on than we call it CMTC-Plus.”

There’s no cure for CMTC but you can do several things to improve the life of patients. For example skin ulcers can occur. Often when there is a confluence of the vessels you get atrophy of the skin underneath it. Skin ulcerations can occur at those places. Treatment with sterile saline dressings may help to heal these ulcers.
Furthermore it’s important to screen for abnormalities to do something about it if possible. For example with ultrasound of the head, the heart (echocardiogram) and the abdomen (looking for kidney, liver abnormalities) several abnormalities can be checked. Also checking for glaucoma or poor blood vessel formation in the eye (reduction of vision) is important to prevent damage as soon as possible.
Kids with a very thin fat layer under their skin on most of their body tend to have diabetes (skin fat is very important for metabolising sugar), high blood pressure and cholesterol irregularities. That should be checked.
Sometimes the affected limb is very weak because it’s got less muscle in it, or the joints are not good, the ligaments and the tendons are loose. In that case physiotherapy will help to improve muscle strength and get those muscles and tendons to hold the joints together.

If a child has a leg length difference of less than two centimetres than shoe lifts or shoe inserts may help so that your pelvis doesn’t end up tilted which can give you spinal issues or scoliosis if it’s left too long.
However if the difference is two centimetres or more than kids need to have surgery. The orthopaedic surgeon will operate on the growth plate in the good leg when the child is close to puberty. That will arrest the growth of the good leg and will give time to the other shorter leg to grow while puberty finishes. If they do it right than the legs end up being completely even.

Self-esteem is a big issue for kids with any visible differences. Any child needs self- esteem but kids with a visible difference have an extra challenge. How do you deal with staring? If you teach them to smile to people who stare at them these people will often smile back. You should teach them strategies for getting big. It makes you feel small when people stare at you (power imbalance). One of those strategies is smiling or making jokes (for 5 bucks I’ll let you take a picture of me).

The Rare disease foundation published a book: ‘Rare is everywhere’. It’s a book about rare animals (available at Amazon Canada). Rare animals are everywhere in the animal kingdom, so it’s completely normal. It’s what makes you unique and special. With this book we hope to teach kids about rareness. To change the idea that something abnormal is completely normal.
Teaching kids what to say when somebody is saying: What is wrong with you?
When they are very young: Watch out I have superpowers. Let them make jokes.
When they are older; I have a skin disease a skin condition. Very important to mention that it’s not contagious because that’s what many people think when something shows on the skin.

CMTC is almost never passed on to the next generation. It does not seem to be heritable. According to Patel mosaicism could be the cause of CMTC. Mosaicism is the mechanism that causes that only part of the body/tissue has changes, like the marbled skin in CMTC. After fertilization between egg and sperm, daughter cells are formed. When a change in the DNA occurs in one of these daughter cells, this change is passed on to the tissue that is eventually formed from this cell. So it’s not something that the father or mother has passed on. Wherever the change in DNA is present, the tissue doesn’t grow properly and there are blood vessel irregularities.
Another theory is that it is non-mosaic. The change is present in every cell but it only shows in certain cells because the effects in other cells are somehow buffered.
The third theory is that it’s non-mosaic but the first change doesn’t cause the disease. You need a second hit in a mosaic fashion to cause the disease.
The earlier the genetic change in the development of the child (foetus) the more severe the disease is and sometimes the change in the DNA is so early that it’s not compatible with life.

An example of a mosaic disease is Proteus Syndrome. Proteus syndrome is a rare condition characterized by overgrowth of the bones, skin, and other tissues. Organs and tissues affected by the disease grow out of proportion to the rest of the body. The overgrowth is usually asymmetric, which means it affects the right and left sides of the body differently.

The AKT gene plays an important role in causing Proteus syndrome. AKT regulates growth of cells. In Proteus syndrome the AKT1 gene has one mutation which causes cells that have it, can no longer control their growth. PI3 kinase is an important immediate messenger between AKT and the cell nucleus where the message to grow or to not grow arrives. Changes in PI3 kinase are also the cause of a lot of diseases.

The approach to look for the genes that cause CMTC is to take a piece (biopsy) out of the affected limb (skin or muscle) because that’s where the changes in DNA have taken place. Blood is not suitable for research because it grows so fast that cells with changes get out competed by the normal cells. Blood often purifies itself.
However it’s difficult to get a biopsy from a CMTC-patient, because that is also the area in the body that doesn’t heal very well. So far Pattel has obtained three samples, but at least five are necessary for reliable results. Ideally it should be ten samples.
To sequence the protein coding part of a genome it costs about CAD 600 (Canadian dollar) per sample. To do the whole genome it costs about CAD 3000 a sample.