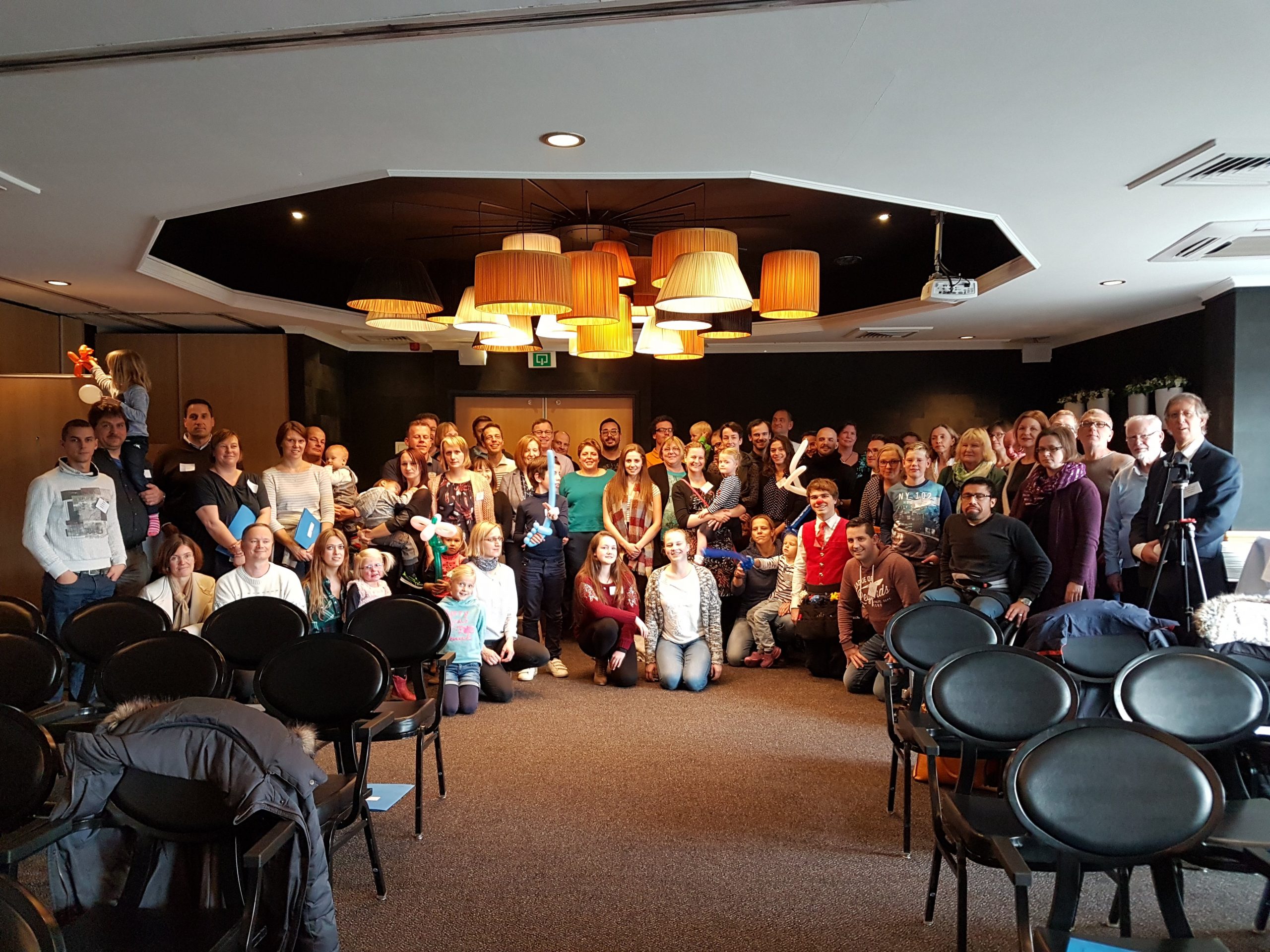 This year the CMTC member meeting on 12 November was combined with the LGD Alliance (Lymphangiomatosis & Gorham’s disease)meeting.

Many people attended the meeting (about 130 people from 11 different countries). After the welcoming speech by Lex van der Heijden (CMTC-OVM) and Aaike van Oord (LGDA) the two organizations continued their own programme in separate rooms.
In his opening remarks, Van der Heijden reflected on the recent death of Prof. Arnold Oranje. Oranje contributed a lot to the CMTC association. Despite his retirement, he was still working a lot. Everyone will miss him enormously.
After an overview of the results of the past year, Van der Heijden mentioned the anticipated activities such as the Family Day in 2017 (Efteling) and the festive annual member meeting next year in a special location on the occasion of the 20th anniversary of the association.
After the opening the programme began with multiple readings simultaneously. Altogether there were nine parallel sessions in blocks of three where one could choose from. Meanwhile, diagnoses took place and at the end of the afternoon fresh waffles were available in the parking lot and soon a long row arose. In the evening the traditional pancake dinner took place. Below you will find a brief summary of some lectures.

Several lectures were videotaped and they are available to members and physicians.

Sandra Corbière of Eurordis, the European Organisation for Rare Diseases talks about the Rare Barometer Programme (for more information see http://www.eurordis.org/rare-barometer-programme). This programme is designed to collect as much information as possible about the experience and expectations of patients with rare diseases. Rare Barometer Voices includes respondents from the European continent (48 countries, as defined in the EURORDIS Membership) which allows much more data to be collected than from a single country.

Patients can register on this website (http://www.eurordis.org/voices). They then receive an invitation to participate in a survey. Data will be treated confidentially. The more people participate, the better. The results of the survey will be sent by e-mail so that participants can get insight into what other people in similar situations to them feel and think.
The patient input collected through the Rare Barometer programme will help rare disease patients to influence healthcare policies that affect them. It will allow policy and decision-makers to be better informed with knowledge only patients and their advocates can bring to the discussion. This allows more funding to become available that could increase research and awareness about rare diseases.
There are carried out various surveys. Currently, there is a survey about how living with a rare disease has impacted your autonomy and daily life including work and school. Look at http://www.eurordis.org/content/current-surveys-survey-impact-rare-diseases-daily-life. The full survey report will be available in January 2017.

Peter de Laat is general academic pediatrician at Erasmus MC – Sophia Children’s Hospital in Rotterdam. He is a member of the WEVAR team (Workgroup Vascular Anomalies Rotterdam) as well as Suzanne Pasmans (children’s dermatologist) and Hester Langeveld (pediatric surgeon). This multidisciplinary team WEVAR establishes the correct diagnosis for children with vascular anomalies and determines the follow-up policy. Laat focuses on the systemic treatment of vascular tumours. In his lecture, he gives a description of various vascular tumours and vascular abnormalities (malformations) and for some of the abnormalities, he discusses the treatment. Laat stresses that the major difference between tumours and abnormalities is that tumours arise after birth and abnormalities are present at birth. Tumours grow much faster than malformations and are found more in girls than in boys (3: 1 / f: m).
There are many different vascular abnormalities, some of which are very similar to one another. Therefore diagnosis can be difficult also because doctors often do not use the same language. To create more unity in this area the so-called ‘ISSVA classification’ (International Society for the Study of Vascular Anomalies, http://www.issva.org/) has been drawn up. This list shows the names of vascular abnormalities found so far and their descriptions. Also, any reference genes (DNA) associated with the specified abnormality is given when known.

Maaike Vreeburg is a clinical geneticist at Maastricht MUMC. She focuses on issues including genodermatology, which is the field of the genetic predisposition for certain diseases of the skin, nails, teeth, hair and blood vessels of the skin. Vreeburg states that by finding a genetic cause / abnormality, the patient gets more clarity about her/his condition.
At least a cause has been found, and patients with the same condition and the same genetic abnormality can be compared with each other. It also allows for predicting the likelihood of such a disease in the next generation. This can be used in prenatal diagnosis and preimplantation genetic diagnosis.

Functions of many genes unknown

Finding the genetic cause of a disease is not easy, emphasizes Vreeburg. Nowadays it is possible to determine the whole genome (the entire DNA sequence)of a human being but there is still much unknown. Every human being has about 20,000 genes, and from about 5000 genes the function is known however from the remaining 15,000 the function still is a mystery. Each gene can be translated into a protein having a certain function in our body. In between those 20,000 coding genes, there is also non-coding DNA, of which also a lot is still unknown. Furthermore, if you compare the DNA of two individuals there will be quite a lot of variation, but this difference is natural variation and not always leads to a disease.

To find the genes that may be responsible for a certain disease there are different methods.
One of the ways of investigation is, for example, to examine the DNA of families in which a particular condition occurs frequently. One then looks for DNA variations that are only present in family members with the disease. Unfortunately, this does not work for rare disorders of which also rarely more than one case is found within a family.
Another way is the so-called trio-approach ‘. In this approach the DNA of a ‘healthy’ (without disease) mother and a ‘healthy’ father is compared with the DNA of a child with a disorder. It means one is looking for ‘the novo’ variants. These are changes (mutations) in the DNA that arise in sperm or egg cells and that are passed on to the child, but they are not found in the parent DNA. Not all mutations lead to a disease but very rarely it does.
A third method is the investigation of a large population of patients with the same (external) disorder. A search is done for genes that have to do with the disease by comparing the DNA of people with the disease to the DNA of healthy volunteers. A complication in this study is that some mutations are found only in the affected tissue (such as CMTC). This is called mosaicism and occurs after fertilization in the embryo. That is to say, sometimes a spontaneous mutation/deviation occurs in the DNA of one of the cells in the embryo. That mutation is then passed to all of the cells that arise from this cell. But all other cells, which derive from normal cells will not have this mutation.
So if you take a biopsy from a CMTC patient from healthy tissue, you will find nothing unusual. For this study, it is important to have a homogeneous group of patients with similar characteristics so that there is a higher chance of finding the same mutations. But it is not certain that similar characteristics always have the same underlying mutations. Another problem is that the affected tissue recovers badly and so taking a biopsy from this tissue is not very pleasant for the patient.
For some vascular abnormalities, associated genes have been found that clearly are responsible for (the onset of) the condition. Often, in this case, is the preparation of a homogeneous population of patients easier.

Shona and Ans would like to thank everyone for their enthusiastic participation in the Kids event. The children had fun tinkering with great end results. Shona and Ans: “We were very impressed with the results and enjoyed the event very much. Also we received many compliments. Fantastic that we have been invited to next years’ event (November 4) in the jubilee year! We love to come back to the children to make crafts all day.

You can also visit our website www.koffieshoc.com and order items, so we can bring them with us next year, such as clay or fun gifts for the holidays.
If you have any questions, email us: info@koffieshoc.com, we are happy to help. Looking forward to November 4, 2017!” 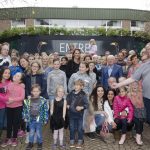