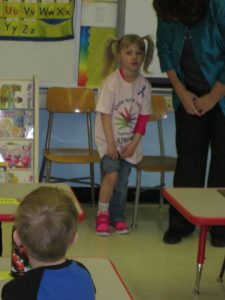 When I entered the world on July 10, 2009 everyone thought things were going to get easier.  I guess I proved everyone wrong!  When I was born I had a very unusual coloring on my right leg that the doctors had never seen before.  They first thought I had broken or dislocated my leg while in the womb.  There were scans and x-rays done but everything on them looked normal.  The doctors were stumped.  They decided to have a dermatologist come and visit me while I was in the hospital.  The dermatologist said that he thought it was an extreme case of cutis marmorata (common in newborns) but he had read about a rare condition called cutis marmorata telangiectatica congenita (CMTC).  He assured my parents that wasn’t what was going on, that it was very rare, and he would probably never see a case in his career.  I am sure glad my mommy was paying attention and went home to do her own research.

During my first three months of life my parents realized that I was cold all of the time (even though it was summer in the USA).  They realized that my discolored leg and foot were much colder than my other leg and food.  We went to visit the dermatologist again and he stuck with the diagnosis of cutis marmorata.

My parents continued to monitor me and realized that my affected leg was growing much more slowly than my other leg.  I was not pulling my affected leg over my body. I was sleeping much more than other babies my age and I was still cold no matter how many layers I was dressed in.I ate more food than would be expected but gained weight slowly.  I was cranky in the night and my parents believed it was because I was cold.  In December we went back to the dermatologist and he realized he didn’t have the needed answers and referred me to Mayo Clinic.

On January 13, 2010, I made my first visit to Mayo Clinic.  I was diagnosed with CMTC.  Three days later my parents received another blow-it was discovered that I had three atrial septal defects in my heart.  Mayo Clinic also wanted me evaluated for my gross motor skills but could not get an appointment during this trip.  My mom had known this was CMTC from her first research after discharge from the hospital but it still was difficult to accept.  She had already reached out to many families affected by CMTC through Facebook.

Support CMTC-OVM and young adults such as Becca

There were additional challenges along the way.  The next hurdle that was discovered was that I struggled to start eating solid foods and there seemed to be some issue with my hearing.  In February of 2010, my parents contacted Birth to Three about having an evaluation to see how I was developing.  During these evaluations, it was found that the muscle mass in my mouth was significantly less than on the unaffected side.  This came as a huge surprise to my parents because only my leg and foot have markings.  They did not realize that I could be affected in other parts of my body even if the discoloration wasn’t present.  My mom actually started measuring my arms (like she was already doing for my legs) and realized there was also a slight difference in length and girth between them as well.  Late in February I received an unexpected call from the person doing the speech evaluation.  She was the one who realized there was a hearing issue and said we would need further evaluation.  She had contacted our primary care physician about the concerns and they wanted to talk to me about the possibility of having Becca’s hearing evaluated the next time we were going to Mayo Clinic.  Mom explained that we were going to more appointments in a month so my physician called and had the hearing evaluations added to my schedule.

After mom and dad were told that there was a possibility of hearing loss, they tried to play lots of games with me.  They realized my responses came when something was in my visual field (and they found out I had a really good visual field).  I wouldn’t respond to small toys, rattles, and items dropping.  My mom moved on to big things like slamming doors and a smoke detector and I still didn’t respond.  Guess what-my mom was REALLY worried again!

When we went to the appointments in March at Mayo Clinic we had a mixed bag of information.  The hearing testing came back inconclusive.  This actually continued to be an issue for almost another year (that included seven hearing exams).  The person we saw for the gross motor evaluation told us that although she was behind her movements would come.  This was a huge relief because somewhere along the way a doctor had told us that she may never walk.  Things were looking up.

After these early months my parents continued with my appointments.  As I said I had several hearing tests and since they were always inconclusive the doctors recommended an auditory brainstem response test.  This was scary because I had to go under anesthesia again.  This test showed that everything was working and after the test I actually started responding to sounds consistently.  The doctors really don’t have answers as to why. 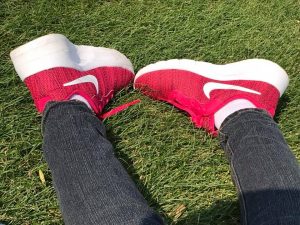 I received my first shoe lift at two years old for my limb length discrepancy.  I continued with different lift styles until I was ten years old when I had surgery to stop the growth plate in the knee of my longer leg to allow my affected leg time to catch up.  The surgery was difficult, but I was very thankful for no longer need a lift in my shoe or have special shoes.  Now I can shop for shoes just like all of my friends.  I do love shoes!

The other scary item that had a happy ending was the story of my heart.  At three years old I had another appointment at Mayo Clinic to check my heart to determine when I would be getting surgery to fix it.  My mom and dad waited anxiously for the results of my echocardiogram and it was amazing news.  The holes in my heart had closed all on their own-all three holes!  The cardiologist told my parents that in all the years he had been a doctor he had never seen three holes as large as mine close on their own.  It was a miracle.

I still have a great deal of issues with temperature regulation.  In the winter I am always cold and I have to eat a lot of food.  The doctors now believe that is because I am burning so many calories trying to maintain my temperature.  I have had to stay in during recess during school when the temperature is too cold.  Additionally, I needed to be more careful in the summer of overheating because when I was younger I didn’t sweat.  As I am getting older, that is getting better.

I have been lucky that I go to school with a great group of kids.  I have had very little teasing from others.  My parents started sharing my story from a young age and my class has always celebrated Rare Disease Day at school.  My parents would send treats and I would take the book “Buddy Booby’s Birthmark” to read to the class.  I have another classmate who also has a rare disease so now we celebrate our special day together at school.

My parents have continued to encourage me to try new activities and be involved.  My parents made sure that the school and my teachers understood CMTC.  My siblings are always behind me, supporting me, and sometimes pushing me when I want to give up.  All of these are the reasons I am so successful today.

Support CMTC-OVM and young adults such as Becca 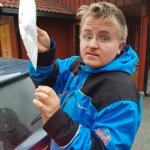