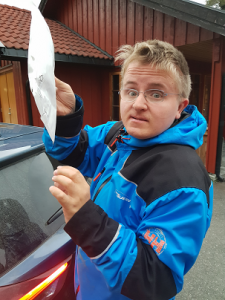 This is the story of Kenneth, told by his mother.

Kenneth was born on February 18, 1994 in Harstad, Norway. He was born by caesarean section. He weighed 4150 grams, and was 53 cm long with a head circumference of 40,5 cm. We were sent to Tromsø University Hospital where he was in an incubator for the first days. He had a large head and a limp body with a lot of marbling on the skin. He had an enlarged spleen and liver. Visible markings on the upper lip. Fused fingers and toes. Low-set ears were also noted as something abnormal.

Support CMTC-OVM and adults such as Kenneth

Kenneth was fed with a feeding tube for the first days. When we got home from the hospital, I had trouble breastfeeding Kenneth because he was too lethargic to eat. We started with infant formula after about 6 weeks. We also started with physical therapy. This was necessary to strengthen and train the muscles so that Kenneth could turn over and become strong enough in the neck to keep his head up. 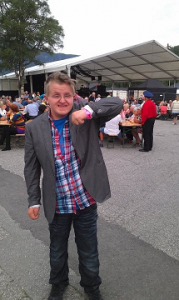 In May 1994, we were checked at Harstad Hospital where it was discovered that Kenneth had hydrocephalus. The circumference of the head had increased considerably in the first 3-4 months. We were sent to Tromsø University Hospital where Kenneth had a shunt inserted.

Kenneth had to use asthma spray the first year, due to difficult breathing and mucus build-up.

We moved to the south of Norway to Telemark in December 1994. Kenneth was at Rikshospitalet in Oslo and at Telemark Central Hospital (TSS) on several occasions where CTs and MRIs were taken. A doctor at TSS, Dr. Jon Steen Johnsen, wrote a report on Kenneth at this time. I did not find out about his studies so early in the phase. I will return to this.

Kenneth had neck surgery when he was about 1,5 years old (Arnold Chiari malformation). The cerebellum was pinched at the base of the skull. A little extra space was made in the neck.

Kenneth had fused fingers (3rd and 4th on the right hand) and toes (3rd and 4th on both feet). The toes were not separated, but the fingers were partially separated in an operation. Kenneth was infected by Staphylococcus aureus during this operation, so the procedure was not as successful as it could have been.

He was in daycare from the age of 2 until the start of school when he was 6 years old. There he received physical therapy and educational help.

We continued with CTs and MRIs about 1-2 times a year until Kenneth was about 4 years old. Then he was operated on by expanding the skull by about 1 mm – it was opened from ear to ear in a zigzag pattern.

Kenneth’s syndrome was registered at the Center for Rare Disorders, where the mother is the contact person if new cases appear in Norway. I was contacted by two other families with children with the same syndrome in Norway.

We always knew that Kenneth had a rare syndrome, but not which one, even though Dr. Steen Johnsen, as mentioned before, had written a report about this. This was presented to us at the Rikshospitalet in Oslo when Kenneth was about four years old. They thought they had discovered something new, but we were only told that it was Dr. Steen Johnsen’s report they had found. They did not mention then that there is a name for the syndrome. We did not find out until he was about 8 years old (M-CMTC). 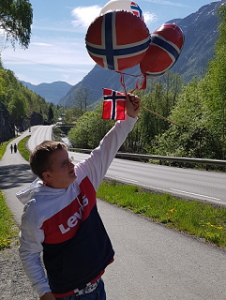 We searched the internet and found an organization for this syndrome in England. Through it, we came in contact with Lex Van der Heijden in the Netherlands and what is now the Global CMTC-OVM Organization.

I then attended a conference organized by this organization in Amersfoort, the Netherlands.

The following year, Kenneth, me and my sister, went to Maastricht for a genetic examination of Kenneth by dr. Maurice van Steensel. This was to confirm his syndrome and to contribute to the study of the syndrome. Examinations were performed and skin and blood samples were taken. I also attended the annual conference on a later occasion. Then I went with the mother of another Norwegian child with the syndrome.

Kenneth had to change the hose attached to the shunt at the age of 8 when it became too short. When he was 17 years old, a new shunt was inserted because the first one became clogged and had grown so that they could not remove it. This was placed on the other side of his head.

Kenneth had a new operation in the posterior skull pit (Arnold Chiari malformation) when he was about 10 years old. The scar after the first operation when he was 1,5 years old had become so hard that there was not enough space. They removed some scar tissue, and that was enough to provide the space needed. After this operation, he had a severe epileptic seizure and was in a coma/respirator for 24 hours.

Kenneth had to use diapers until he was about 12 years old.

Kenneth has attended regular schools and been in regular classes that were adapted into small groups. He has received special education the whole time.

We have visited the dental health service for examinations regarding the syndrome and to receive training for oral motor skills.

Ingrown toenails have been a problem. These have been operated on so that the outer part of the nails is removed to the root. No ingrown nails after this. One toe had an outgrowth, which turned out to be a piece of bone in the toe that grew through the skin. This was surgically removed.

Kenneth has had various bicycles with and without motors as aids for leisure activities. He skied a bit until he was 12 years old, after that it became too difficult to support him.

After an eye examination at the age of 10, Kenneth has worn glasses.

Kenneth has had his kneecap out of joint on four occasions. The reason was a fall on slippery ice. Two of these incidents were related to the first time. Kenneth now wears studded shoes in the winter. 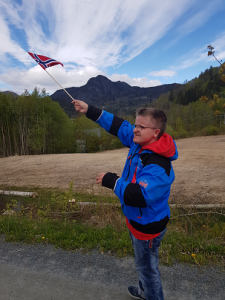 Kenneth is a happy boy. His first words were YES and HELLO, unlike most children where their first words are NO and BYE. Kenneth’s language is mostly one-syllable words, he turns the words around a bit and often says the end of a word first.

Kenneth uses a PC and an iPad where he finds his film clips himself. He is hung on skeins of yarn. Wraps these around the whole house and fastens things in the thread. Will watch the same TV channel all the time, and watch DVDs and look at his iPad at the same time. Loves Coke and hot dogs. Likes to drive a car, snowmobile, and 6- wheeler, basically all motorized vehicles. Trains are the best thing in the whole world. He never gets tired of Thomas and his friends. Routines and predictability are important to Kenneth. Kenneth does not like loud and sharp sounds and therefore is afraid of dogs, especially if they bark.

Kenneth is now 27 years old and lives in his own adapted home in a housing collective where he has round-the-clock care/supervision. He is also often at home with me. He is at a day center with appropriate activities during the day.

Support CMTC-OVM and adults such as Kenneth 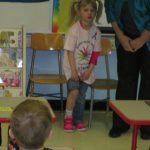 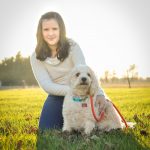