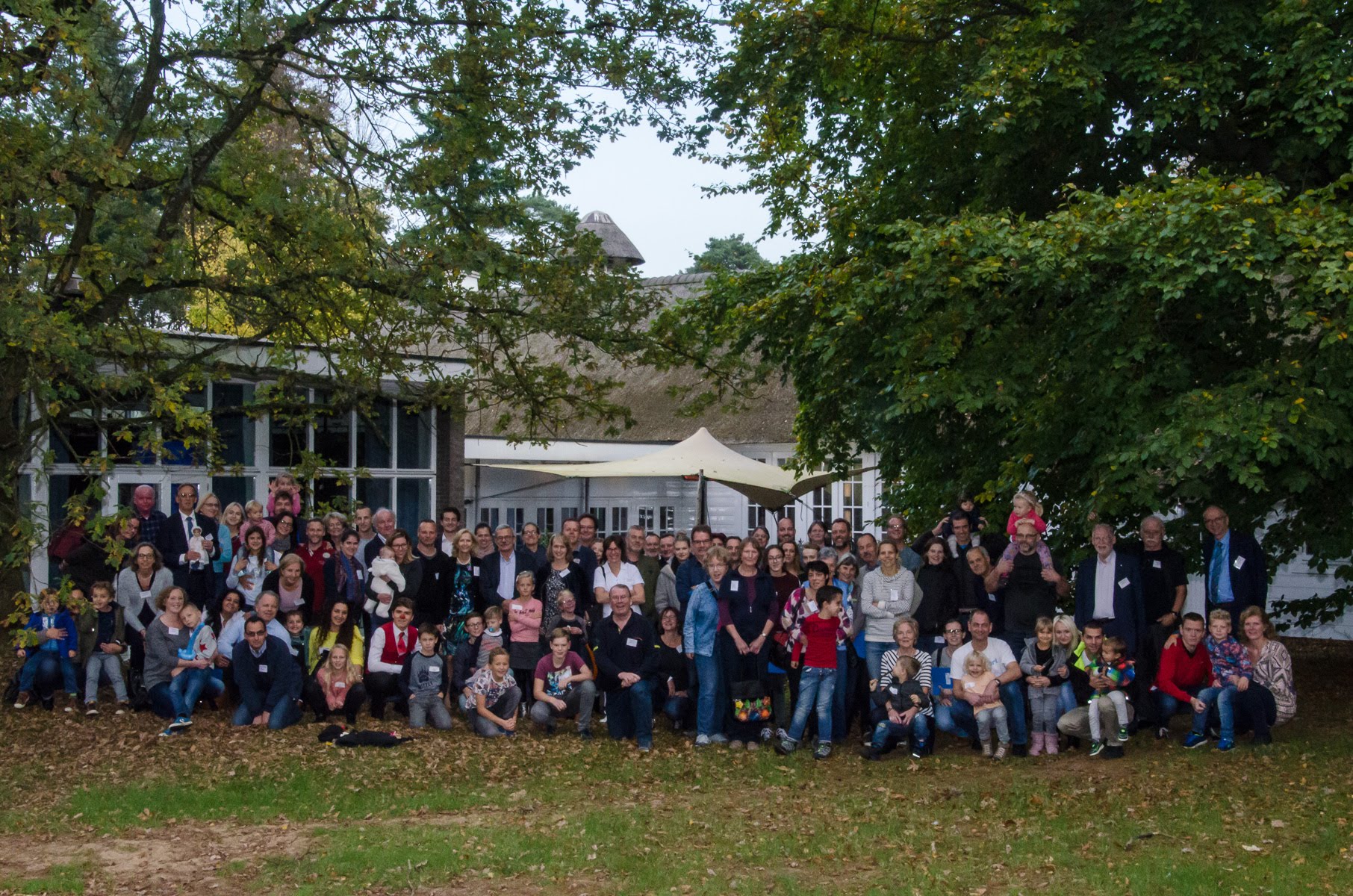 This year the Dutch CMTC-OVM organisation celebrated its 20th anniversary and had chosen a special venue (Landgoed ISVW, Leusden) for its annual member meeting.

Many participants liked the location very much. “It felt like being at home instead of being a guest,” was one of the reactions of the visitors. In addition to various presentations by professors and doctors, participants could take part in interactive workshops. 85 adults and 35 children from 7 different countries attended the meeting.

Treasurer Jacob Schipper gave an overview of the (healthy) financial situation of the CMTC-OVM Association. Annual membership contribution remains €35,-.
The treasurer was granted final discharge by the members in respect of the 2016 financial year.

President Lex van der Heijden welcomed everybody and started the meeting by asking the audience some questions in a mobile phone poll.

It appears that the majority (45%) of the people comes to the conference to meet and talk to other patients and parents from patients. 60% wants to know more about genetic research before they would agree to participate. 86% uses the CMTC-OVM website, also 86% knows about the information folders being in many different languages, 55% reads the newsletter, 63% knows about the closed CMTC-OVM Facebook site, 68% does not know the children’s website, 50% experiences difficulties at school due to their condition.

In the first meeting/lecture, Prof. dr. Suzanne Pasmans, professor of Paediatric Dermatology at the Erasmus Medical Centre Rotterdam, askes the audience to come up with questions.
Participant from the UK: “My experience is that doctors in the UK know very little about CMTC and so it gives a lot of reassurance to come here and meet experts.”
Participant from Germany: “ We don’t have any expert centres like in the Netherlands. We are trying to set up an expert centre but it’s all going very slowly. Also because rare diseases do not attract much attention from the outside world (Pharma companies). It’s difficult to find experts in this field in Germany.” Dr Peter Steijen remarks: “There are experts in Germany, like Rudi Happle, dermatologist at the University of Freiburg. You will find more if you check the website of the European Expert Centre in the field of vascular diseases (https://vascern.eu/) and skin (http://www.genodermatoses-network.org/).
Another participant: “If you google on CMTC you always end up at the Dutch CMTC-OVM website, which in one way is good cause you can find a lot of information there. On the other side you are not directed to the experts in your own country.”
Other remarks: more pictures are needed to show the different conditions. People should tell their personal story.

Prof. dr. Peter Steijlen is dermatologist at the Maastricht University hospital and Eindhoven hospital. He is also part of the genodermatology team of Maastricht UMC.
Steijlen stresses the importance of a correct diagnosis but he admits that in the field of vascular malformations this is not easy. “There is such a wide variety of malformations and a lot of them look similar. However, most vascular malformations have a genetic cause. So if we know which mutations cause the malformation, it is easier to make the correct diagnosis.”
With a correct diagnosis, there is more clarity for the patient, preventive management may be possible, the recurrence risk may be estimated (some malformations are hereditary some are not), patient organisations can bring patients together with the same condition so they can exchange experiences and research is possible.”

One single mutation in one gene can be the cause of a disease. The protein produced by a mutated gene may not function properly and causes a disease. For example, cystic fibrosis is a single gene disorder. The protein produced by the mutated gene does not function normally and an abnormally thick sticky mucus is produced on the outside of the cell, causing respiratory problems but also problems in other organs.
However most genetic diseases are caused by several mutations in several genes. It’s not easy to find the mutated genes causing the disease because everyone can have mutations or variations in their DNA and most do not lead to a disease. The main question is: which mutations are connected to the disease? DNA sequencing is an important tool to find mutations. The DNA needs to be compared with people who do not have the disease. New sequencing techniques may give answers in a fast way, but can also be costly.

More and more genes connected to diseases are being found due to fast sequencing techniques. For example, several dozen mutations in the RASA1 gene have been found to cause capillary malformation.

Mutations can also be present in a mosaic way. That is, only part of the body is affected like in CMTC. Sometimes a spontaneous mutation occurs in the DNA of one of the cells in the embryo. This mutation is not present in a parent’s egg or sperm cells, or in the fertilized egg, but happens a bit later when the embryo includes several cells. The mutation is passed to all the cells that arise from this cell. But all other cells, which derive from normal cells will not have this mutation. The earlier the mutation occurs in the embryonic stage the more widespread the mutation is. Some 100% mosaic forms are not compatible with life, for example, a 100% CMTC patient (in all cells) will not exist.

Examples of mosaic disorders are port-wine stain and Sturge Weber syndrome which are both caused by a mutation in the GNAQ-gene. In a port-wine stain, the mutation is only present in the tissue of the stain, whereas in Sturge Weber the mutations are present in more areas (eyes, head). Macrodactyly is another example of a mosaic disorder. One hand can be affected whereas the other is not.
Klippel Trenaunay, is also a mosaic disorder. At least five mutations in the PIK3CA gene have been found to cause the Klippel-Trenaunay syndrome. This condition is characterized by a red birthmark called a port-wine stain, abnormal overgrowth of soft tissues (such as skin and muscles) and bones, and vein malformations.

To discover which genes are connected to a mosaic disorder, a tissue sample of affected tissue needs to be investigated. Whole exome* sequencing is necessary to have the highest chance of discovering the mutation.

*The exome is the part of the genome formed by exons, the DNA sequences that code for proteins. Exons are alternated by introns, non-coding parts of DNA

Prof. dr. Hans Büller is a paediatrician and former Board Director of Erasmus MC. He talks about his initiative to develop medicines at a fair price.
“Can we go on with the classical way of development of medicines in which the price is determined for a large part by the shareholders?”, he asks.
Büller gives some examples of medicines with extreme prices. Recently there was a discussion on a novel medicine (Orkambi) against cystic fibrosis. It is admitted for the market but not effective for every patient and costs are €170.000,- per patient per year. At first the Dutch minister of public health did not want to reimburse the costs of this medicine but later on, it was negotiated that it is now accepted for reimbursement.
In 1997 a medicine against Pompe’s disease was discovered. There were 9 years of research in the hospital and the license was sold to Pharming to develop it further for the market. Then Pharming sold the medicine to an American Pharmaceutical company and the price of the medicine went up. (€700.000,- per patient per year).

In the classical way of development of medicines, everybody is earning along the way to the final product. One of the problems is that after the initial phase of development usually by a smaller company or university there’s no money for the very costly clinical trials required to test the medicine. Often the license for the medicine is sold to a larger company that has the money for the clinical trials. Finally, the price is decided but there’s a lack in transparency in this field. It’s unclear why medicine prices have to be this high. Instead of pharmabashing Büller decided to set up a company to develop medicines for a lower price (Büller estimates prices will be 8 to 10% lower). He hopes that this way also medicines will be developed for rare diseases which otherwise would not be developed because they would not make enough profit for shareholders. Fair medicine develops medicines from the moment the first clinical tests are needed.

Fair medicine is a social enterprise: there are no milestone payments, no bonuses, normal salaries. Development costs are fully transparent. There is no venture capital. Stakeholders only make money when the product is on the market.

Dr. Peter de Laat is a general academic paediatrician at Erasmus MC – Sophia Children’s Hospital in Rotterdam. He is a member of the WEVAR team (Workgroup Vascular Anomalies Rotterdam) as well as Suzanne Pasmans (Paediatric Dermatology). This multidisciplinary team WEVAR establishes the correct diagnosis for children with vascular anomalies and determines the follow-up policy. Laat focuses on the systemic treatment of vascular tumours. In his lecture, he gives a description of various vascular tumours and vascular abnormalities (malformations) and for some of the abnormalities, he discusses the treatment. Laat stresses that the major difference between tumours and abnormalities is that tumours arise after birth and abnormalities are present at birth. Tumours grow much faster than malformations and are found more in girls than in boys (3: 1 / f: m).

There are many different vascular abnormalities, some of which are very similar to one another. For example DCMO (diffuse capillary malformation with overgrowth) and CMTC. Therefore diagnosis can be difficult also because doctors often do not use the same language. To create more unity in this area the so-called ‘ISSVA classification’ (International Society for the Study of Vascular Anomalies, http://www.issva.org/) has been drawn up. This list shows the names of vascular abnormalities found so far and their descriptions.
Expert centres (for rare diseases and orphan drugs) in Europe can be found on http://www.orpha.net. 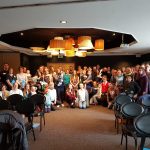 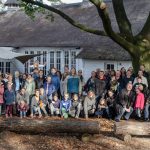